I don’t know what the market is like for dedicated MP3 players, but I’m still a fan of them. Where everyone else wants to collapse the several needs in their lives into one device, music playback is still one that I prefer to have on its own. The reasons are esoteric:

When my Zune died a few months ago, I resorted to using my old Droid Bionic as a stand-in. There was some minor success there, but as mentioned above, it didn’t deal with the high-capacity SD card gracefully at all times. Also, as much of an old fogey as this makes me, I’m much happier with physical buttons that I can rely on 100% of the time to skip, rewind, fast-forward, pause and play tracks as well as manipulate the volume. A smartphone with a volume rocker and a power button as its only physical buttons doesn’t cut it.

So I went ahead and spent what I believe is a very reasonable $58 on a Sandisk Clip Zip 8GB from Amazon. Sandisk has quietly been making solid, affordable MP3 players for those who care for them with its Clip line. There are some dedicated fans of the Fuze media player line as well. The Clip Zip, released in August of 2011, is so far the latest in the Clip family which includes the older SanDisk Sansa Clip and Sansa Clip+ models. 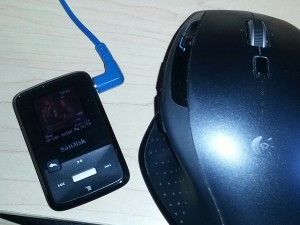 The Clip Zip next to my computer mouse

In my short time with it (I just received it yesterday), I’m really liking it. Part of it’s because I instantly nerded out on it and flashed a custom firmware to it. (I’ll get to that later.) It has a side slot for a microSD card, which–of course–Sandisk also sells. That means that you can store up to 40GB of music with a 32GB memory card, the highest “officially” supported card size. The physical controls are just fine–a 4-way d-pad which doubles as play controls when you’re not in a menu; a central selection button; and a raised Back button in the corner. A power button adorns the top. Everything I need to control the device without having to look at it, something people on the street these days are notoriously bad at. (I swear, pedestrians need to stop texting/gaming while walking, especially in NYC where a wayward biker can run you over.)

The DAC in the device leads to crystal clear, thumping sound, just like I remember. It’s not like the sound coming out of my phones was bad, but where there should have been dead silence there was instead a very faint but noticeable hissing whine. I never heard that on any dedicated MP3 player before my Zune died, and I expect never have to hear it, considering I listen to podcasts where there’s no constant music to drown it out.

The firmware it came with, however, leaves a bit to be desired. It did weird things like categorize podcasts under Audiobooks. Other Amazon reviews didn’t take too kindly on SanDisk’s UI, either. So before making the purchase, I did some research and planned ahead to install Rock Box, an open source firmware and UI that its development team has ported to multiple devices including iPods, Cowon players, Archos players, and more. It’s not particularly pretty and it’s a far cry from Zune’s incredibly fun interface, but it opens up the folder structure so that I can access what I want, how I want, and when I want. It doesn’t force your songs to be in a certain directory structure in order for you to find them. If your music doesn’t fall under an Artist \ Album \ Song hierarchy, the firmware doesn’t hide it or misplace it; you can browse the file manager however you want to find it. Having grown up with DOS, Windows, and directory trees, this didn’t bother me.

It doesn’t have to resemble a clumsy Explorer window, either. While at first it seems to limit you to the file browser, it presents you the option of compiling a database. The steps? Select “Database”, select “Build” and off it goes on its merry way, cataloging all of your music and spitting out the familiar categories of Album Artist, Genre, and the like (so long as you made sure your tag data is correct). It would have been nice if it asked me whether I’d like it to build the database as soon as I booted it up, though. 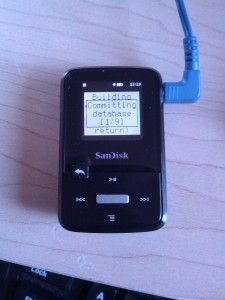 Rock Box on my Clip Zip quietly builds my database, though I do wish it did so by default.

The other problem with the official firmware is that out of the box, the device would not recognize my 64GB card, which is of the SDXC variety. SanDisk only “officially” supports up to 32GB SDHC cards. You’d think that it would put out a firmware update to support its own larger-capacity, faster cards, but no. Fortunately, Rock Box does, and so long as your card is formatted with the FAT32 filesystem (use SDFormatter or a similar tool), your device will see it.

Of course, the average Joe shouldn’t have to go through this, which is why things like the iPod exist. For my tastebuds, the combination of the price, size, and sound quality made the Clip Zip and Rock Box duo my best alternative, post-Zune. For those willing to tinker just a little bit, any fellow old fogeys out there who want their buttons back without having to pay over $150, this is an admirable alternative.

Check out the Clip Zip’s product page on SanDisk’s official site. You can also visit Rock Box at www.rockbox.org (also linked above); they have an automatic installer that makes it simple to update your firmware. (Note that if you go the Clip Zip route, you can find the official firmware–which you need in order to flash the update–here.)

0 comments on “The SanDisk Clip Zip and Rock Box Firmware”